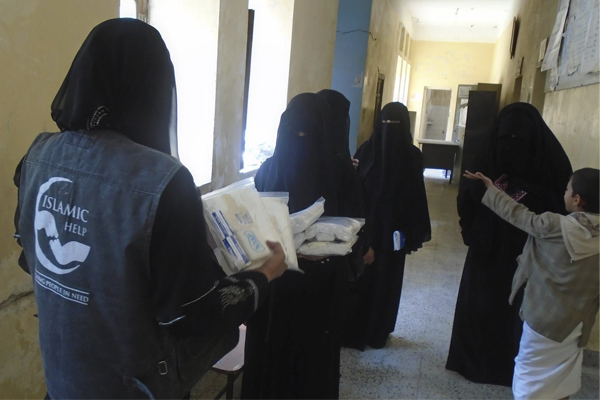 Working with the United Nations, Islamic Help launched an emergency response programme for affected IDPs in five districts in the Al Jawf Governate.

The crisis was triggered by clashes between Houthi rebels and opposing armed tribesmen. A resolution was reached with the signing in September of a Peace and National Partnership Agreement.
The United Nations Office for the Coordination of Humanitarian Affairs (UNOCHA) said the conflict had left about 1,200 families displaced.
Majed Abdulla Al-Numim, an IDP in Al-Ghail district, said he benefitted from the assistance but needed more support from the government, as he was having to provide for a family of ten.

Faisal Al-Aswad, an Al Jawf based journalist, said urgent reconstruction was needed in the governate and that although the conflict had ended, some IDPs remained in shelters in schools as their homes were destroyed in clashes.

As well as Al Jawf, the Islamic Help Yemen team has also carried out emergency response programmes for IDPs in other affected areas including the distribution of TBA (Traditional Birth Attendant) kits, health and hygiene kits, plus water filters provided by Unicef in the Al Qaflah and Al Sawd districts.

There are so many ways to help, make sure you stay in the loop and sign up to our Newsletter or find out more about our latest Mission Possible Tour