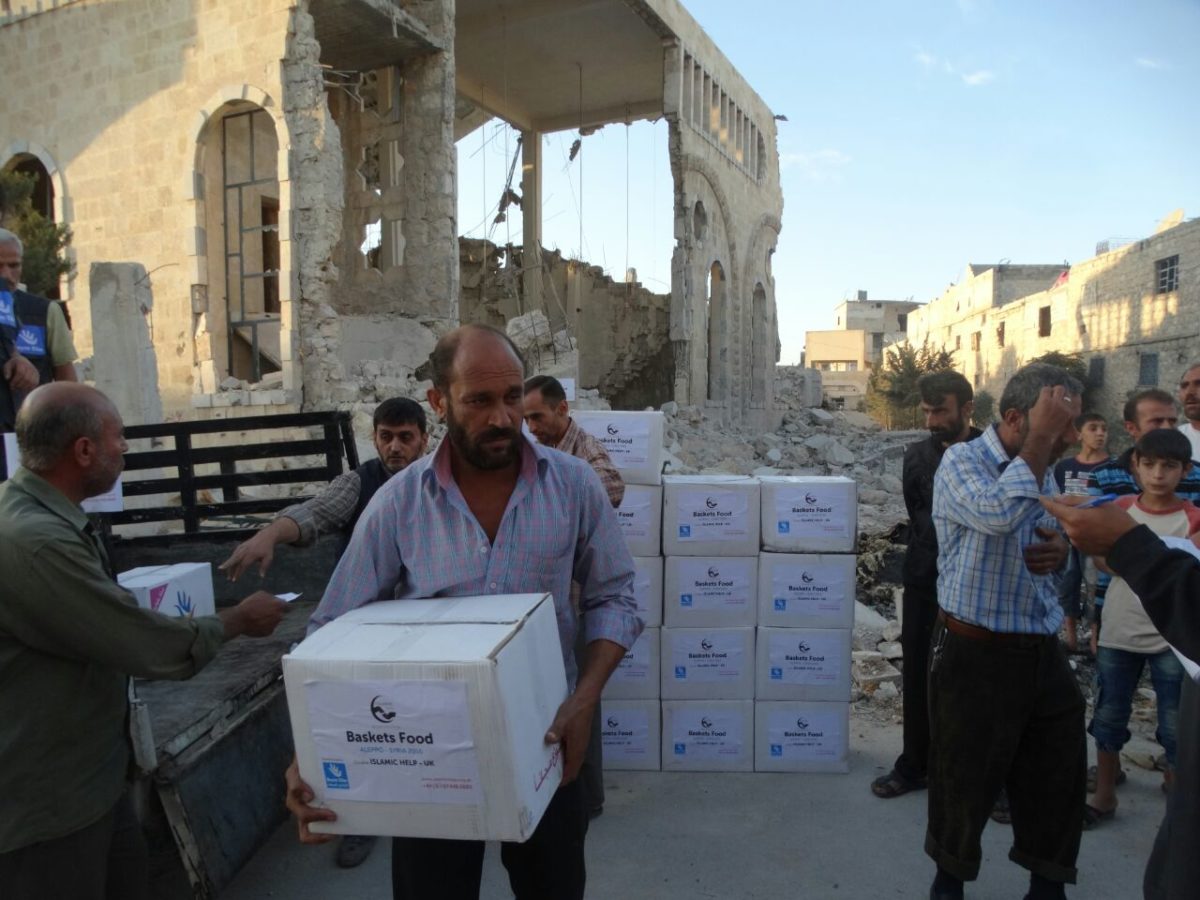 Nearly 6,000 Syrians trapped in the besieged city of Aleppo have received emergency aid in the lates...

Nearly 6,000 Syrians trapped in the besieged city of Aleppo have received emergency aid in the lates...

Nearly 6,000 Syrians trapped in the besieged city of Aleppo have received emergency aid in the latest distribution programme carried out on behalf of Islamic Help’s supporters. Emergency food packs and baby milk - two life-saving essentials - were handed out to families by Islamic Help’s charity partner in Syria, White Hands.

It was the second emergency distribution carried out by White Hands in Aleppo during October - earlier in the month it provided aid for 1,600 beneficiaries. The latest distribution involved emergency food baskets to 681 besieged families and 1,039 milk packs to benefit 519 babies at risk of malnourishment.

The historic city of Aleppo was once Syria’s largest metropolis with a pre-war population of 2.5 million. While the current population is unknown, it’s estimated that more than 300,000 people - including nearly 21,000 children under the age of two years - are living in a state of siege.

“The humanitarian situation is getting worse, particularly with the absence of safe passage for the injured, women and children to northern Syria, near the Turkish-Syrian borders,” said a White Hands spokesman.

“Food and baby milk are two life-saving essentials for people inside Syria. Trapped in besieged Aleppo, people suffer the difficulty of affording basic food supplies, due to rising prices, unemployment, and limited finances.

“Moreover, crisis profiteers prey on people’s need for food and their fear of being murdered while passing the strategic, and dreadful, Castello Road which became the only supply line to Aleppo. In addition, thousands have been forced to flee their homes with the bombing of populated areas and market places.”

For the emergency distribution, priority was given to beneficiaries from the most vulnerable categories (women and children) as identified by international relief standards. Each food pack was designed to last a family for a month. It contained essentials including sugar, rice, groats, spaghetti, vermicelli, margarine, vegetable oil, lentils, tomato paste, salt, jam and beans.

The aid distribution is the latest in a series of emergency programmes carried out in Syria by White Hands on behalf of Islamic Help donors.

In August, it provided baby milk powder for 300 infants in Aleppo and during Ramadan it carried out an emergency food delivery for more than 3,250 beneficiaries in the city of Ar-Rastan.

It also carried out another Islamic Help programme in Syria in which food baskets and baby milk for 112 infants at risk of malnutrition were delivered in the besieged city of Madaya where residents had resorted to eating grass because of starvation.

The emergency work of White Hands has continued despite the tragic loss of one of its workers, Ibrahim Sawas, who was killed along with his two young children in aerial bombardments of Aleppo earlier this year.

Please support the people of Aleppo and Syria in their time of need. Donate today.